The 5th annual Hampton Roads Writers Conference was held at the Westin Hotel at Town Center in Virginia Beach September 19-21. 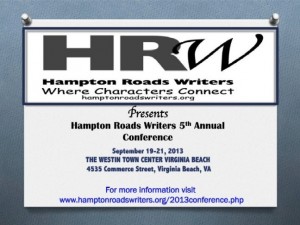 The conference began Thursday evening and ran through Saturday. Because of a previous commitment, I was unable to attend the Thursday evening session. I arrived Saturday morning, registered, and went to the plenary session, featuring keynote speaker, Lisa McMann, New York Times bestselling Young Adult author of the WAKE series, VISIONS series, and UNWANTED series. Being neither a YA reader or author, I was curious as to what she had to say. An hour later, I added Wake to my list of books to read.

A “first ten-lines” review by a four-person panel of authors and agents followed the keynote address on Friday and Saturday. The panel members confessed to be nit-picky in their comments, and one might ask what could be learned from listening to critiques of someone’s first lines. It was for me and many others, a lesson in what is required to grab the attention of the reader and make them want more. One of the panelists said that it was once believed the first page or two were the most important because that is what someone who picked up the book would glance through before deciding to buy it. While that is still true, he pointed out that the author must now pay close attention to the first 25 pages, because that is what a reader sees if he or she downloads a free sample from amazon.com. If you can’t hook the reader in those 25 pages and make them want more, they won’t purchase the book.

Sunday’s keynote speaker was Kevin Maurer, co-author of No Easy Day. I had read the book and was eager to meet him and to hear what he had to say. I wasn’t disappointed. His account working with former Navy SEAL “Mark Owen” to write the book held everyone’s attention. I also attended Maurer’s session on interviewing for nonfiction. He is a fascinating individual and a genuinely nice guy.

Other sessions I attended were: Copyrights and Wrongs – Fair use of quotes and other things to avoid a lawsuit; First Person Problems – The specific challenges and opportunities of writing in first person; Where Does My Story Start – How to write a winning first chapter; Show and Tell, Interviewing for Nonfiction – Getting the story right; Writing What you Don’t See – How a point of view can drive a plot; and The Bookkeeping Side of Writing – Literary dollars and sense.

All of the presenters did a fantastic job. Of them, I found Virginia Beach author Lydia Netzer to be both energetic and informative about the craft of writing. She not a teacher by training, but if she taught a writing course, I’d be the first to sign up.

The youngest attendee of the conference was Koyoko Leaman, a 12-year old girl who was accompanied by her parents. Her first-10 lines were critiqued, and I was in a session where she read the first chapter of her manuscript. Remember the name. This young lady is already a posed and talented individual, one from whom I’m certain we will hear from in the future.

So, if you’ve never attended a writers conference, do so. Your expectations will be exceeded. And if you’re fortunate enough to live in or near beautiful and history-rich Hampton Roads, Virginia, join Hampton Roads Writers and plan to attend the 2014 Hampton Writers Conference. You won’t regret it. Hope to see you there.