This is my first blog post. My emphasis in this and future posts will be on the craft of writing and what I have learned about the complex and difficult process of using twenty-six letters to create: words, sentences, paragraphs, characters, settings, and scenes. I am in awe of those who have mastered it, especially those who do so without an MFA degree hanging on their wall.

Five years ago, I left behind my career in pharmaceutical research and development and began my second act writing life. I had a story to tell and a laptop. I began writing. I was wise enough to know I had much to learn but too inexperienced to realize how little I knew about creative writing and the publishing business. I read books on writing, absorbing the principles like a dry sponge. I discovered that the annual South Carolina Writers Workshop Conference is held in Myrtle Beach, where my wife and I had moved. I registered.

After completing my first manuscript, I quickly became frustrated and dejected by the agent query process, so I self-published my debut novel Libido’s Twist. The first copies arrived from Dog Ear Publishing a few weeks prior to the April deadline for the 19th Annual Writer’s Digest Self-Published Book Awards Contest. I completed the entry form and submitted it with a copy of my novel. Months later—after almost forgetting about entering the contest—I received an e-mail informing me I had won an award in the genre fiction category. Although by then I had received many positive comments and e-mails from my readers, the award was the validation I needed. 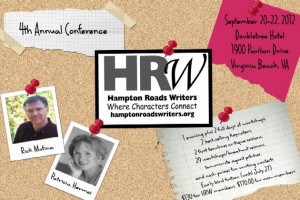 We now live in Virginia Beach, Virginia. My shelves are overflowing with books on writing, and I have four South Carolina Writers Workshop Conferences and one Hampton Roads Writers Conference under my belt. I’ve attended Writer’s Digest webinars, had agents critique my work, and joined a local writers group. I’ve completed my second manuscript and am once again immersed in the query process. With advice from agents during one-one-one meetings at the SCWW Conference this past October, I refined my pitch and query letter. That has resulted in two agents requesting a full copy of my manuscript and one requesting the first hundred pages. I’ve since received rejections from two of them, but both were candid and supportive regarding my writing.  I will continue to pursue the traditional route for a while longer but, if unsuccessful, will self-publish and feel good about it. I’ll keep you informed of my progress.

In future blogs, I will share what I have learned and provide you with my opinion on a variety of topics. I hope you will find my posts interesting, informative, and maybe even a little entertaining.