Historic Day for the US Navy and Naval Aviation

Remember the date, Wednesday, July 10, 2013. It’s the day that the US Navy’s drone, the X-47B dubbed “Salty Dog 502,” made an arrested or trapped landing on an aircraft carrier, the USS George HW Bush (CVN-77). In trapped landings, the drone, like a manned aircraft, lands and is stopped when the tail hook latches onto the arresting cable on the carrier. It is the most difficult maneuver a pilot will make, and likewise, the most difficult maneuver for a drone. 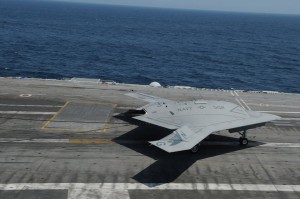 Following deck-handling trials on the USS Harry S Truman (CVN-75) in December 2012, the X-47B drone was successfully launched from the USS George HW Bush (CVN-77) in May 2013. A couple of weeks later on the BUSH, the X-47B made a number of touch-and-go landings, where the drone landed and took off without stopping. The trapped landing, the final hurdle for the experimental  drone, is a milestone in naval aviation. (U.S. Navy photo by Mass Communication Specialist Seaman Lorelei R. Vander Griend/Released)

It’s worth noting that after two successful takeoffs and trapped landings, a third trapped landing was aborted when one of the drone’s three onboard navigation systems developed a glitch. The drone was diverted to an airfield on Wallops Island, Virginia, where it landed without incident. Once the issue is resolved, the drone will return to Naval Air Station, Patuxent, Maryland.

The other of the two X-47B drones will be launched for unspecified tests the week of July 15th. David M. Ewalt of Forbes reported that after these tests, the two drones will be retired, and engineers will analyze their systems and data to determine if the X-47B is ready for final production and deployment.

According to Rear Admiral Matt Winter, Program Executive Officer for Unmanned Aviation and Strike Weapons, the drones that the Navy will ultimately deploy will be in operation by 2020. By then, the first of the Navy’s next generation carriers, the USS Gerald Ford (CVN-78), scheduled for delivery in 2016, will be in service, as may be the USS John F Kennedy (CVN-79), scheduled for delivery in 2020. The contract will be awarded to one of four companies next year. It’s been widely reported that the four are Northrop Grumman’s  X-47B, Lockeed Martin’s Sea Ghost, Boeing’s Phantom Ray, and General Atomics Sea Avenger.