On July 10, 2013, after two earlier successful trapped landings on the USS George HW Bush (CVN-77), the Navy’s X-47B “Salty Dog 502” drone self-aborted on a third attempt and flew to an airfield on Wallops Island on the Virginia Eastern Shore. The plan was to have the other of the two Northrop Grumman experimental drones, Salty Dog 501, make a trapped landing on Monday, July 17th, so that the objective of three trapped landings could be reached. Unfortunately, Salty Dog 501’s trapped landing attempt was also aborted because of unspecified technical issue. 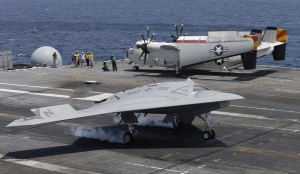 Some news media are questioning the sucesss of the $1.4 billion drone project because 50% (2 of 4) of the trapped landings failed. The Navy and Northrop Grumman, the manufacturer of the X-47B, are taking a more positive view, saying that the tests were successful, and they have enough data to analyze the results and move forward with the drone development program.