Working with a Publisher’s Editors

I mentioned in an earlier post that my book, The Drone Enigma, will be published by Koehler Books in January 2014. I’m in final stages leading up to publication and have recently completed the edit process with the publisher.

No one enjoys the self-editing and revision cycles, but it is a means to an end. However, when the publisher’s editors go to work, the experience is quite different. Someone else is messing with your words, telling you to slash narrative, attribute dialogue, and rewrite or delete scenes. At times, it’s difficult not to get defensive.

During the past few weeks, I’ve worked with both Koehler’s senior editor and copy editor to edit my manuscript. The senior editor took a 40,000 foot view, realigning chapters or portions of chapters, deleting narrative passages that slowed the pace of the story, and asking me to justify the need for some characters to be named because having too many named characters can confuse the reader. The copy editor, on the other hand, took a mid and low level view, editing for consistency, repetition, grammar, punctuation, and spelling.

In the first two rounds with the senior editor, we worked in a Word document, using the Track Changes function. I was familiar with that, having used it for years in the corporate world. After two rounds of editing, he sent the Word document to the publisher. He sent me a copy of what he sent. I went through the document and found I didn’t agree with some of the changes. He assured me that I would have other chances to review it. 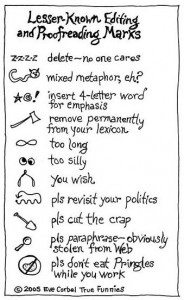 Not your mother’s editing marks (mightyredpen.wordpress.com

A few days later, I had a long telephone conversation with the copy editor, during which she discussed areas where she had questions or needed clarification. After that, I received a revised version in Adobe Acrobat Reader. From that point on, we used the Sticky Note function of Reader, commenting on changes using sticky notes until we reached agreement. There were three or four rounds of this before it again went to the publisher and came back to us. The copy editor and I reviewed it, and found a few additional changes that needed to be made. For the most part, they were errors made in making the requested changes or errors we made in describing the changes. We also found two or three new changes. After two quick rounds with the publisher, we were done and the digital Advanced Reader Copy (ARC) was produced.

Overall, I found the process was not perfect, but it was effective. Sure, I hated to see some of my words struck from the pages. And after writing and editing the manuscript too many times to count before the publisher first received it, the last thing I wanted to do was go back through it. It was a time consuming, detailed, and thorough process. But in the end, I am pleased with the final version and believe it is an improvement over the original.

With the editing finished, it is time to solicit endorsements to be used on the front cover or back cover or inside the cover. I’ll describe that process in my next blog.