Jake Palmer returns in The Envelope

Jake Palmer, an investigative consultant and former Navy SEAL, has returned in The Envelope, the third installment of the Jake Palmer novel series. Also back is Jake’s love interest, Fiona 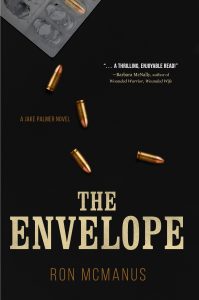 Collins, a pharmaceutical company auditor with an investigative mindset and an eye for detail.

After playing a major role in Libido’s Twist, Fiona had a minor part in The Drone Enigma. Although readers loved the new character, Alona Green, they let me know they would like to see more of Fiona.

In The Envelope, Jake and Fiona pursue those behind a global counterfeit medicine and money-laundering operation. Jake joins forces with a Homeland Security Investigations special agent, while Fiona works from within her company, B&A Pharmaceuticals, which makes the drug that has been counterfeited. The investigation takes them to Philadelphia, New York, London, Rome, and Italy’s Amalfi Coast. Standing in their way—one of the world’s most dangerous men, assassin Viktor Utkin, a former Russian Spetsnaz special forces operator.

The hard cover, paperback, and ebook is now available on Amazon and Barnes & Noble‘s websites.