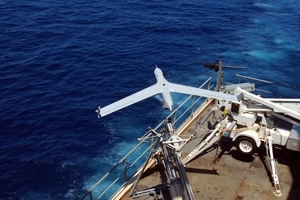 In December, Iran claimed to have captured a U.S. ScanEagle surveillance drone that was violating Iranian airspace. The ScanEagle, designed to be flown from a ship, is a small drone, 4.5 feet long with a wingspan of 10.2 feet with an empty weight of under 30 pounds.

The most notable use of the drone was in in 2011 in the MV Maersk Alabama piracy incident in the Indian Ocean. The New York Times report that US Officials have downplayed the drone’s technology, stating it has less computing power than a smartphone and camera technology that could be purchased at Radio Shack. If that’s true, one might ask why the ScanEagle system costs $3.2 million.

Photograph of Sentinel Drone that Iran has claimed to have captured

The ScanEagle is one of several drones that Iran has claimed to have captured, the most notable was the RQ-170 Sentinel Drone in December 2011. The New York Times reported that the Sentinel Drone was lost over Afghanistan, however, officials stated they would have expected to see much more damage if the drone had been brought down. Unless, of course, Iran seized control of the drone and landed it without damage. The other possibility raised in the report is that the drone glided to the ground after control was interrupted.

Is Iran is telling the truth? Can control of a drone be hacked? The BBC reported in “Researchers use spoofing to ‘hack’ into a flying drone” that it can be done. If that’s possible, is it also possible that the weapons systems be controlled?

In 2011 the LA Times and others reported that combat drones had been infected by a virus. All of this makes one wonder how secure the systems that control drone are. And these are government drones. What are the unintended consequences and unforeseen risks when drones are more widely used? I foresee a time when they are as commonplace as security cameras and traffic cameras.