Unaware of the tangled web that will soon entrap them, independent healthcare investigator and former Navy SEAL Jake Palmer and clinical research auditor Fiona Collins team up following the deaths of a physician researcher and his nurse in a suspicious automobile crash in southwest England. Jake and Fiona find themselves immersed in a series of events swirling around the development of a drug that raises libido in women with hypoactive sexual desire disorder. If the drug is effective and safe, it will be worth billions to the company and millions to the top executives who run it. 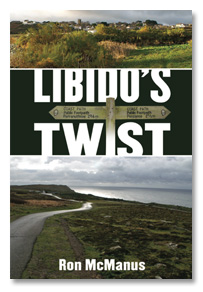 Libido’s Twist follows Jake and Fiona’s deepening investigation that puts both their lives in danger. When Collins is abducted from her home, Jake must rise to the challenge to rescue her and bring those responsible to justice, regardless of what it takes. At stake are the lives of thousands of patients and the fulfillment of his life’s deepest wish. The thriller’s chilling realism is enhanced by the author’s insider information from years of investigating what can go wrong in the complex, lucrative world of pharmaceutical research.

Ron McManus, a former U.S. Navy lieutenant, spent over 25 years in pharmaceutical research and development and became vice president of global R&D quality and regulatory compliance, heading an international group of auditors responsible for auditing the company’s animal and human research. Prior to joining the pharmaceutical industry, McManus was the director of program integrity at the North Carolina Medical Peer Review Foundation, establishing the state’s first Medicaid fraud and abuse investigation unit. 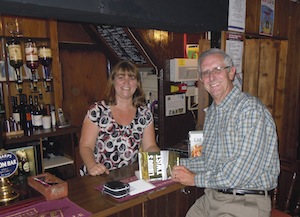 Ron McManus signing a copy of Libido’s Twist for the owner of the Victoria Inn in Perranuthnoe in Cornwall, England. The restaurant/pub is featured in the book.